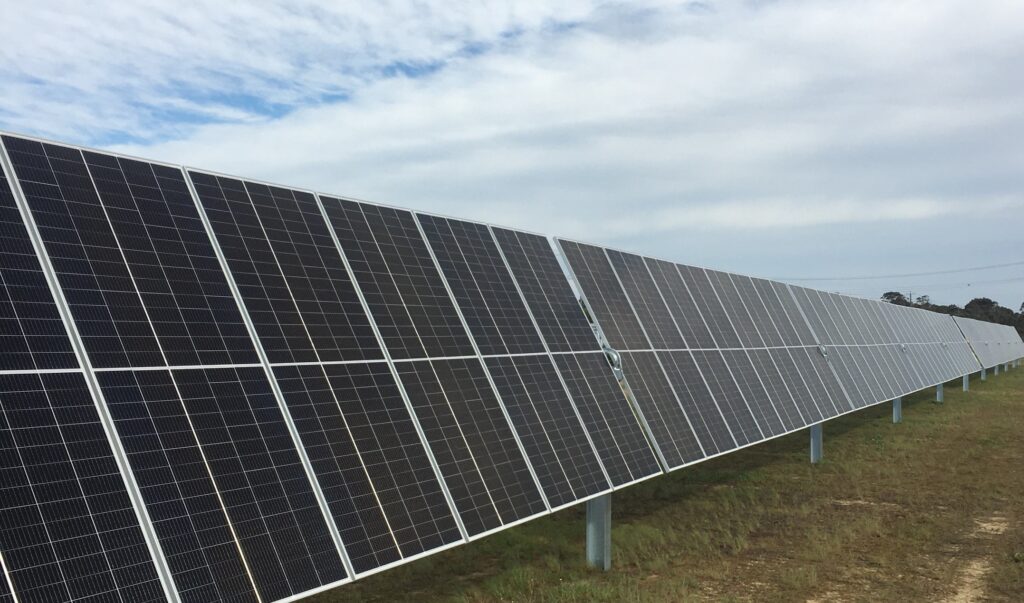 Construction of Melbourne Water’s solar farm at the Eastern Treatment Plant (ETP) has hit a major milestone this week with the installation of the project’s first row of panels, known as the ‘golden row’.

The first row of solar panels has been installed on the Eastern Treatment Plant solar farm project – and it’s being dubbed the “golden row” – with 39,000 panels to be eventually installed to create the 19 megawatt facility.

The solar farm will help power ETP, which is responsible for treating about 40 per cent of Melbourne’s sewage. This means, instead of using electricity from the grid, Melbourne Water will be using the solar plant to help power their own major infrastructure.

The solar farm is one of the many ways Melbourne Water are adapting their operations to prepare for a changing climate, reducing their own carbon emissions and generating more renewable energy.

The farm is being constructed by Beon Energy Solutions and Melbourne Water’s Project Manager Kai So is pleased with the progress.

“This project is an important part of Melbourne Water’s Path To Net Zero campaign and to see the first row of panels installed is a great step forward,” Mr So said.

“We anticipate steady progress as more and more rows of panels are scheduled to be installed in the coming months. The project is due to be completed by mid-2022.”

For more information about Melbourne Water projects and initiatives to reduce our carbon footprint, visit Our Path to Net Zero page.

While some of Melbourne Water’s activities have temporarily changed, this site has been granted permission to continue as a Permitted Work Premise under guidelines permitted by Department of Health (DH).

This site will operate in accordance with the additional restrictions directed by the Victorian Chief Health Officer and DH.

This site has been prioritised as a critical activity and will continue to operate under a COVID-19 Safe Plan.