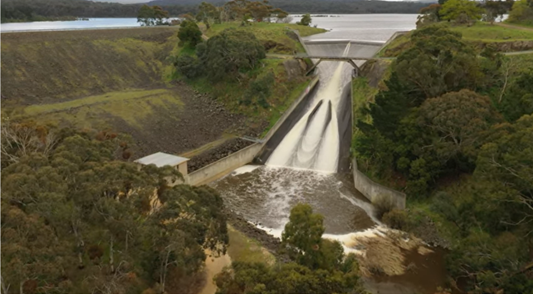 During October, large areas of Victoria become flooded and some areas continue to face a flood emergency. October 2022 has been officially declared the wettest month in Victoria since records began.

Rosslynne Reservoir which holds 25,368 ML of water, spilled for the first time since 1996. Rosslynne River is one of Southern Rural Water's assets and is located in the upper reaches of Jacksons Creek near Gisborne and is the only major storage in the Maribyrnong catchment.

Unlike other structures, the reservoir does not have gates. Instead, it has a fixed crest spillway – meaning when the facility reaches capacity, water flows over the spillway into Jackson Creek.

At its peak, the spillway saw 5888 MLday outflows.

The spillway is an important part of our water infrastructure and receives regular inspections.

See this clip of the Rosslynne River spilling here.